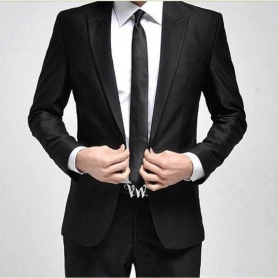 There’s a common saying out there – “Dress for the job you want, not the job you have.”  The comedic response has been, “So I dress as an astronaut everyday,” but there is something to take from this saying.

While it may be acceptable to dress in jeans and t-shirts at your workplace, it is not the best idea.  Even if your immediate coworkers don’t mind, there are others that will judge you.  Appearances mean a lot and dressing appropriately earns you certain amount of respect.

Here’s a true story – a candidate came into to interview very nicely dressed and impressed the all of us on the interviewing committee.  However, on his first day on the job he showed up in jeans, a t-shirt, and tennis shoes.  Our new employee that we were eager to introduce to everyone made a terrible impression on his first day.  Dressing that casually, particularly when you are new to a job, sends the wrong signal.  He did not appear professional or qualified.  Some coworkers even commented that his attire gave the impression that he was not thankful for the position.

So, why do so many employees feel it’s acceptable to be lax in their attire once they have been at a company for a while?  Even though it may be acceptable, it’s never desirable.  You can present a positive, professional, clean appearance without wearing suits to work.  A nice pair of slacks and button up shirt is much more appropriate than jeans and a t-shirt.

Studies have even shown that when employees dress better, it has a positive impact on their job performance.  If your company practices casual Friday, then you probably can attest to the trend that casual attire contributes to a more relaxed work day.