Five Ways Your Smartphone Can Make You A More Productive Employee 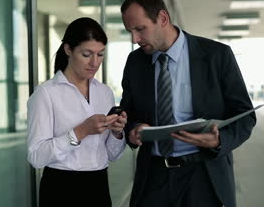 The smartphone is a mobile device that contains an operating system, which is commonly referred to as an OS. Most current smartphones contain a variety of features such as digital cameras, video cameras, touch screens, GPS navigation, and Internet access through various connection points.

The popularity of the smartphone has crossed over into the workplace, and many people have started to use their smartphones at work because the smartphone provides many benefits. For people who are considering the use of the smartphone in their work environment, there are five ways that the smartphone can make them more productive employees, which are quick access to email, ability to communicate outside the office, easy access to the Internet, mobile apps, and recording capabilities.

Ability To Communicate Outside The Office

Many employees spend a lot of time outside the office. Therefore, they miss numerous phone calls, and they lose the ability to make phone calls. The smartphone allows employees to make calls from almost any location, check their messages on a regular basis, and return calls promptly.

The Internet has changed the way the workplace operates. Employees are now able to gain access to the Internet at work to initiate and complete a variety of tasks. The smartphone allows employees to access the Internet through several methods, so people are able perform many job related duties before, during, and after work hours from an array of locations such as airports, hotels, restaurants, and automobiles.

Moreover, with the wide appeal of smartphones such as the Bell.ca android, samsung galaxy phones, and the Apple iPhone, the smartphone has helped change the way people communicate.

There is a popular saying, which states, that there is an app for that. The popularity of mobile apps has made smartphones a powerful resource in the workplace. For almost any situation, employees can find an app that can help solve the problem or answer a particular question.

The smartphone is a popular technology device, and it has become a very valuable tool for employees in the workplace. The smartphone allows employees to be truly mobile while providing the ability to complete work tasks from almost any location.