Workplace Discrimination: How Could It Affect You? 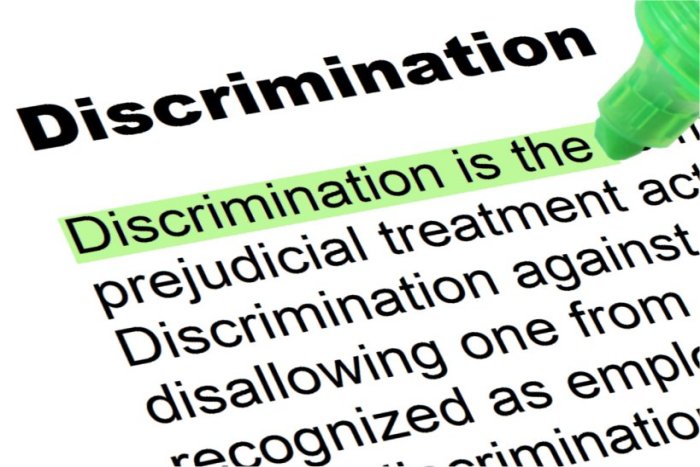 In order to protect against it, you need to be informed about what a company can and can’t do. That’s where we come in. By lining yourself with the appropriate knowledge, you can make sure you don’t get unfairly treated. Here are some types of discrimination you might just run into.

When religious discrimination takes place, it’s as a result of someone being unfairly treated. Obviously, it surrounds their religious beliefs and other people’s reactions to them. The law requires that employers make suitable arrangements to account for someone’s religion. So, if this means they need to allow flexible scheduling or flexible attire, they are required to do so. Hiring based on religion is not allowed – they are required to treat all religious beliefs equally. If you experience discrimination in any form as a result of your religion, you have a right to take the matter further.

Contrary to what some appear to believe, a company is not forced to hire disabled people. That said, they are forced to treat them as equally as everyone else, assuming they’re able to do the job. A resume or interview cannot be glossed over as a result of someone’s disability. If they’re the best candidate for the task, they should be hired for it. Of course, employers are also required to make reasonable allowances for disabled people in the form of equipment. Any harassment that centers around the employment of a disabled worker is also discrimination.

The age discrimination law is in place to protect those who are over 40. The idea of it is to ensure they don’t get overlooked for a younger replacement. So, companies are unable to discriminate against those who are slightly older. However, they are allowed to show favorable treatment. As mentioned by Hutchison and Stoy, “If you are replaced by someone who is substantially younger, you may have a claim.” At the moment, there aren’t any federal laws to protect discrimination for those under 40, although some states have their own laws.

There are two different types of harassment that you’re probably quite familiar with. The first is generic harassment, which includes everything from physical abuse to offensive jokes. It’s when an employer or employee treats you unfavorably, making you feel intimidated or even scared. The other type of harassment you might have heard of is sexual harassment. As you can imagine, this relates to sexual types of jokes, physical contact, and mental anguish. Harassment isn’t always categorized as discrimination, depending on the type taking place. Still, there is always help at hand to put a stop to it.

This one is very, very simple. Employers should not discriminate based on someone’s gender. So, if you’re getting hired for the same position with the same background as someone else, in theory, you should get the same pay. Obviously, if an employer can adequately explain why one person is paid more than another, that’s a different matter. But, if you think that gender discrimination has taken place in either an interview or in your job, it shouldn’t go unnoticed. You might just have a case that should be heard.

Some businesses don’t take all that kindly to criticism, and this can take the form of victimization. Let’s say, for example, that you claim against gender discrimination because you have been wrong done. If your employer is anything but reasonable, they might take the wrong view and seek to punish you. This then turns into victimization, where you’re badly treated for doing something the company didn’t like. This punishment could take many forms, from being denied opportunities to dropping in pay.

This is a bit of a tough one because sexual orientation is somewhat of a gray area. There isn’t a specific federal law that protects against discrimination based on sexual orientation. That said, if a discrimination claim falls into the category of being gender-related, it can be categorized as such. Many states also prohibit harassment based around orientation discrimination and do not allow bias in a hiring or firing scenario. So, even though this is more of a gray area than the rest of our list, you still might have a case if you feel hard done by.

Some employers take the view of pregnancy as an unwanted annoyance in the workplace. Unfortunately for them, they’re not able to discriminate based on this occurrence. So, if you’re pregnant and you’re interviewing for a job, the employer should give you a fair chance at getting it. Similarly, you shouldn’t be fired as a result of it, and you should be allowed to return to your job after childbirth. Of course, your employer should also make allowances to suit your condition while you’re pregnant in the workplace.

I don’t think anyone will be surprised to see this one on the list. Obviously, no employer should be discriminating against race whatsoever. The same goes for employees such as managers, who should never deny opportunities based on race. This goes for all areas of employment, from hiring to firing and everything in-between. If harassment takes place as a result of your race, it’s worth making a claim against it.

We’ve managed to get through most of the workplace discrimination types today, but the list isn’t exhaustive. You’ll find others out there, and you’ll need to be vigilant to protect against them. If you’ve been unfairly discriminated against, be sure to take action. There is no place for discrimination in today’s world of work.