Use Networking to Get Ahead 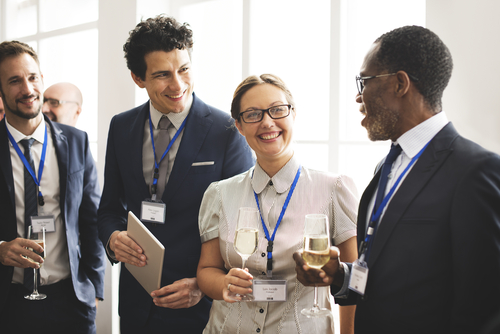 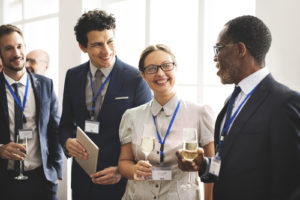 Networking is a crucial aspect of any successful career. Whether you’re looking for a new job or want to shine in your current position, few things are as important as making and maintaining contacts. Some people are put off by the term “networking,” but it’s simply a matter of making conversation with people. There are two steps to successful networking: finding people with whom to mingle and then using that time to your advantage.

Networking-only groups. There are active professional networking associations in every city, and they’re remarkably easy to find. Your local chamber of commerce is one of them, and chambers usually have networking events at least once a month. If you’re a professional, you probably hear about these groups at work all the time but may have dismissed them as a waste of your time or, even worse, intimidating. But these groups are a solid jumping off point for you to develop your network of associates.

Targeted networking groups. If you’re a woman or minority, there may be a business networking group in your area whose sole purpose is to promote your interests. Women’s professional organizations and groups based on ethnic or religious commonalities are set up specifically to help members showcase their companies and encourage associates to use each others’ services when possible.

A local or regional business-to-business magazine. Most of them are remarkably well done and are not only full of helpful business tips, but also plenty of advertisements for networking opportunities. A subscription is well worth the price and may even be a tax write-off.

The social scene. Everywhere you go is a networking opportunity. In social situations, one of the first questions people are asked is, “So, how’s the job going?” And most people say “fine” and leave it at that. But this is a perfect chance to network. You can slip in a little plug for yourself or your company (“We were just named the best company in the city to work for!”) and then follow it up with food for thought (“It’s really rewarding to help people get their finances in order. My clients are just regular people like you and me, but they’re all beginning to amass wealth now.”). You don’t want this to become so obvious that people start to avoid you for fear that you’ll try to hard-sell them every time they see you. But used judiciously, networking in social settings can lead to new opportunities and increased business for you.

Leave your anxiety at the door. Confidence is essential in networking because people can’t tell what you’re nervous about—the situation at hand or your products and services. Either way, obvious nervousness isn’t attractive. Keep reminding yourself what a great service you’re doing for others by introducing them to your company.

Be specific. Especially when networking with people you don’t know, it’s best to be clear in your intent. Too many people are vague about their company and their goals because they don’t want to come off as rude or aggressive. But it’s impossible for a contact to help you if he doesn’t know what you’re after. Do you want information about a company? An introduction to his associate? To be kept in mind for a job opening? Just say it!

Keep in touch. If you only talk to or correspond with people when you need something, your contacts will disregard your attempts. Be sure to keep track of important dates (such as birthdays), and get in touch then. Or set up a lunch meeting once in a while with nothing on your agenda except saying hi.

It’s a two-way street. One of the most common mistakes people make in networking is forgetting that you have to scratch other people’s backs if you want them to scratch yours. The best relationships are ongoing ones, and if you take without giving, you’ll soon find yourself without contacts. Really pay attention to what people are saying about their own business and, when possible, give their services a try. You can bet they’ll remember and use your company’s services as well.